One of the questions I often see asked by people planning to walk a camino is “Is there any particular albergues that I should stay at?”. Obviously, the experience of any albergue/hotel/monastery is subjective and depends on many factors.

For some, the thought of sleeping in a normal bed after 3 weeks of climbing ladders into top bunks is enough to have them raving about how amazing the night was. For others it can be the communal meal, the pilgrims they met there, the ‘quaintness’ of the building, shower facilities, cleanliness, the hospitality of the owners.. literally hundreds of albergues and hundreds of pros and cons that can influence a decision as which would be classed as a favourite.

Having spent 42 days on the Frances and 17 on the portuguese I ended up staying in over 50 places… Not all were albergues, I stayed in medieval monasteries, a couple of hotels and even an air b&b but when I look back over all of those experiences there is one that stands head and shoulders above the rest. 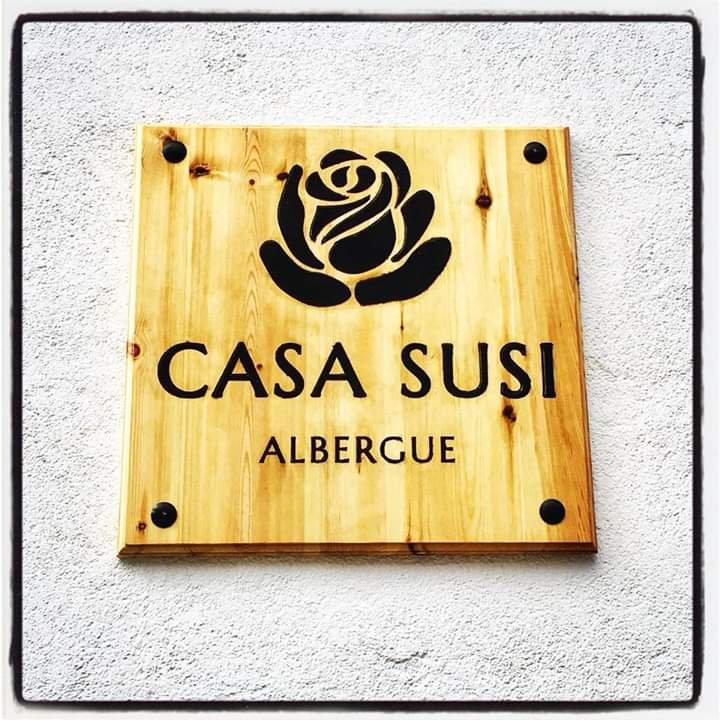 It was day 32 of my camino and I was walking alone. Jessie and Susan had raced on ahead and Randy was somewhere behind me, (nothing to do with him struggling up hills, he had spotted a place that offered a swimming pool and had visions of himself sat drinking margaritas in his ridiculously tight swimwear). My wise pilgrim guidebook offered 8 places to stay in a small village named Trabadelo (171km before Santiago, roughly 30km after Ponferrada) and one place caught my eye. Casa Susi was described as “Recently restored by a pilgrim, Group dinner available”. But the thing that swung it for me was “Individual beds”.. I rang ahead and booked my space for the evening.

I arrived early and spent some time sat in the shade in a pleasant little seating area to the side of the building. It overlooked the garden and just a few metres further down the garden there was a stream where pilgrims can have a paddle and revive their weary feet. Before long, Sue appeared with a smile and ushered me inside. Walking through the door from the street, (the camino literally passes the front door) I walked into a pleasant room dominated by a long table.

This is where the communal meal was to be served later but for now it served as a place to sit and relax while having a drink and chatting to the other pilgrims that were arriving. I was eager to freshen up and set myself up with a bed etc so I could spend the rest of the evening relaxing.

Walking further into the building I passed a couple of shower rooms and walked into paradise… a large open plan room filled with two rows of single beds! 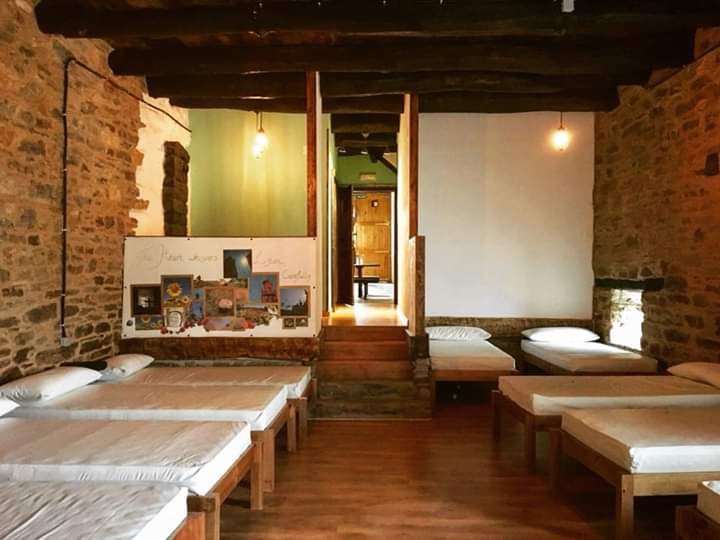 My next surprise came when I went to shower. After countless days of showering in cubicles not much larger than an upright coffin I had walked into another slice of heaven.. the shower rooms seemed huge and clean, and new.. I placed my clean clothes away from anywhere they could get wet, (as opposed to having to hang them over the shower door which invariably got them soaked), and considered doing a cartwheel or two just to make use of the available space. showering and bathroom athletics completed I decided to sit at the big table and be sociable (for ‘sociable’ I mean drink wine).

The owners Sue and her husband Fermin were buzzing around and I sat with a few other pilgrims (one of which was Annie who I had met before) and we sampled the wine. Sue and Fermin had to pop out and I was promoted to assistant albergue manager.. my role was to sit with the wine and help any other pilgrims who happened to wander in.

Later that evening Sue and Fermin cooked an incredible meal, (They grow some of the ingredients in the garden.. it doesn’t get fresher than that), and roughly 12 of us sat around the table and chatted. I found out that Sue was from Australia and had met Fermin on the Camino (he’s spanish). They had fallen in love and had decided to open their own albergue. They have been sheltering pilgrims since 2017 and you can tell they absolutely love their choice. As hosts they can not do enough to make their guests feel comfortable.. Wine flowed, amazing food was eaten and the chatting and laughing lasted well into the evening. Not forgetting that when the evening drew to a close we all climbed into our lovely comfortable single beds for a great night’s sleep!

The next morning involved a quick coffee and I was ready to go… it was then that disaster struck! I realised that I had lost my jacket… I have no idea where I had left it the day before. Whether it was at the last albergue I’d stayed in or one of the bars or benches where I’d rested along the way.. It was at this point that Fermin jumped to my aid. Apparently pilgrims often leave items in albergues.. poles, clothing, false teeth etc, (ok maybe I made the false teeth bit up) he sifted through the pile of things left and found me a replacement jacket. I don’t know why but it absolutely made my day.. I would have survived without a jacket, I had other clothing that would have sufficed but Fermin’s kindheartedness just really seemed to underline how lucky I had been to discover such a great place.

I’m sure that as I left I hugged him for slightly too long and he will remember that uncomfortable moment for years to come. But as the Camino so often reminds us, sometimes a small act of kindness can make a big difference to someone’s day. As I hoisted my rucksack onto my back and walked out into the sunlight I was sure I would struggle to find anywhere that embodies the true spirit of the camino more than the incredible experience that is Casa Susi.

Casa Susi is situated on the Camino Frances in Trabadelo, roughly 19km before O Cebreiro.

(This is not a paid advert by the way.. I just thought somewhere this special needed to be written about… Although I do expect second helpings of the communal meal next time I go 🙂)

9 thoughts on “A diamond on the Camino Frances”